How to educate a Luxury Guard

Every puppy is a different character. Every little puppy has his own physical and mental needs. In order to become a good companion, you need to know their needs exactly and be able to satisfy them. That's why we've also created the "Puppy Application Form" to assess what kind of puppy would be ideal for you.
A puppy can become a friend, a companion, but it can grow up on your head and frustrate your life. Which one you choose is up to you. All puppies can be raised, and we will do our best to make every little baby in the Luxury Guards kennel an irreplaceable companion. We would like to share some educational policies with you, which we will separate into two parts:
Fast development period
The puppy normally arrives to his new final home at 8-12 weeks of age. The new little arrives, a real Luxury Guards doll, but what's next? The first few days can be very decisive. It is worth leaving the puppy free to get to know his new environment. Just put him down in the middle of the living room, then let him go! Let him know every corner of his new home. Some puppies find it harder to dissolve and maybe they need a little patchwork. You have to be patient with the new arrival and never -even by accident- yell with it in the first few days! An unpleasant first impression can last a lifetime for a dog. A good Cane Corso will never forget ... strict punishment can have the opposite effect to what you want.

Every age has it's own beauty, use the puppy's first few days to build trust! In this case, it is advisable to bring the puppy to a foreign environment and release it without a leash. The puppy is still so small and helpless that he will not be run away because the only stable point is his master. So you will be able to walk in the future without a leash.

At this age the most important is the high level of socialization of the puppy. Bring him among people, other animals, but don't make the puppy an unpleasant experience. Listen to the graduation! Don't take a walk on the busiest, noisy route first. Take it to a quiet place where you can meet one or two people, a few cars, maybe other dogs, and take him gradually to more busy places.

Always talk to the puppy! Praise if he does something well, but let's also make him aware of something bad. He can get used to commands to link them to a particular activity now. Make him easy daily routines. The easiest example is feeding. Always try to feed your puppy at the same time and at the same place. You should prohibit everything you don't want to do later and get used to whatever you want to do later. If you don't want make him to sleep in bed, don't let him go there from beginning. If you want make him to have a rest in the cage after dinner, then start it from the very beggining.

During the fast development period, excessive movement should be avoided in a large breed puppy. You should choose a form of movement where the puppy can indicate if he is tired. Throw him a ball, play with him, if the puppy gets tired, he just doesn't go for the ball and the game is over. Do not force long walks, because the kid will go as long as his master wants it, and you may be pushing him. And why is that wrong? It can cause problems for its development, such as long-term health damage that can no longer be reversed.

To sum up, devote a fast development period to maximum socialization and confidence building. Spend as much time with the puppy as possible, take him everywhere with yourself as much as you can. Keep the puppy thin as much as possible and do not force him for movements! Learn to say no! In a long term, it is not profitable to seduce the sad eyes over the empty feeding bowl. It is in your interest to have a healthy dog ​​at adult age!
Fully developed age
The puppy get his final form between 18 and 24 months of age. At this point, it has passed through the full character development and will not change in appearance either. The dog is always his master's image, just like the time you invested into him. If you come to the point that the dog has health problems due to faulty feeding or too intensive movement, the dog cannot be changed. Things you haven't taught him will probably be hard to learn. The lack of socialization is likely to be final and irreplaceable.
We can declare that the dog is ready.

If you have done a good job, you got a healthy, friendly friend who opens up a lot of new gates in your life. With a healthy, well-educated dog, you can try out a whole lot of new hobbies that you haven't thought about before! Read more about these in the "Activity" menu.

Cue
It is important to note that a Cane Corso or a Ca de Bou is not a toy! A big bodied, temperamental dog is a weapon that can easily fall into the wrong hands! Think about it ... these dogs are throwing thousands of kilograms in a weight-pulling tournament. If you could not win respect for yourself and you could not discipline the dog, you would certainly not be able to keep him on leash. The dog is not become loyal by the chain!

Cane Corsos and Ca de Bous bred by the Luxury Guards kennel, are also very intelligent varieties that can be literally taught to anything. In the right hands, they can become the best companions in every aspect of life. At the same time, in incomprehensible hands, this can also turn back! That's why the puppy purchase in the Luxury Guards kennel is preceded by a couple of hours of casting to see if we can give such a dog to an interest, and  see if he can be a good owner. We are happy to see you sympathize with these great breeds and show interest about our dogs, but we kindly ask you to read about the breed and learn more about it before you buy a puppy! 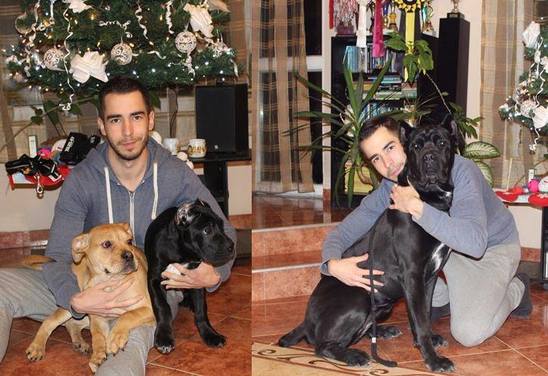